The above photo has been doing the rounds on the internet with claims it is Álvaro Múnera Builes, a Colombian animal rights activist who worked briefly as a bullfighter in his youth under the name ‘El Pilarico’ in Colombia and then Spain. With the image comes these words, also claiming to be from Múnera.

And suddenly, I looked at the bull. He had this innocence that all animals have in their eyes, and he looked at me with this pleading. It was like a cry for justice, deep down inside of me. I describe it as being like a prayer – because if one confesses, it is hoped, that one is forgiven. I felt like the worst shit on earth.

In fact, not only is this not true, it could not be true, not least because the matador in the photo is actually Francisco Javier Sánchez Vara, pictured right, who is still working as a bullfighter in Spain. Meanwhile the words actually come from an article by the author and melodramatist Antonio Gala Velasco in the Spanish newspaper El País in 1995.

Below is how Múnera actually looked in the ‘suit of lights’ of a novillero. A novillero is a novice bullfighter. Múnera never even became a matador, let alone a famous one. 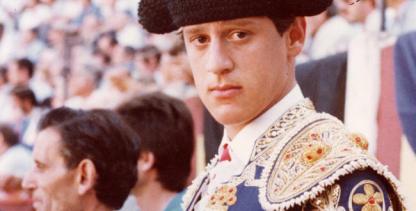 However, the most compelling reason that photo can have had nothing to do with Múnera is that he did not leave bullfighting because of some conversion in the bullring; quite the reverse. It was the bull that made him leave.

In 1984 a bull called ‘Terciopelo’, from the breed of Marqués de Villagodio, caught him in the foot and tossed him across the ring, fracturing the fifth cervical vertebrae in his neck – along with other injuries – which rendered him permanently paraplegic.

It was only later after he had been transferred from hospital in Spain to a recuperative facility in Miami to be closer to his relatives in Colombia that he developed a ‘moral’ problem with bullfighting. According to his own account, it was the doctors, nurses, other patients and their families treating him with contempt because of his bullfighting past which caused the change. In his own words, he converted to their point of view because “there are more of them, they must be right.”

Whatever you think of this as a reason for revising the moral code by which you have lived your life, it is clear that it was not the behaviour of a bull while dying that caused this man to end his run of 150 bulls killed.

So, what is the actual matador, Sánchez Vara, doing in the photo?

Well, the reason he is sitting down in the path a dying bull as it walks along the barrier has nothing to do with despair. Which is why you can see the situation exactly replicated below by the more famous matador Sebastian Castella. 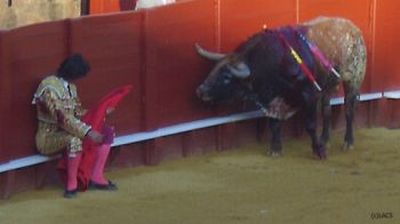 Sitting on the ‘strip’ around the ring after the sword has been placed in the bull is a known desplante, or act of defiance, within the part-scripted, part-improvised spectacle that is the corrida de toros. Whatever the corrida is, it is certainly not a fight. The English word bull-fight derives from the English pastime of baiting bulls with dogs, hence their national symbol is the bulldog and Spain’s is the bull. The concept of fairness or sport no more enters into the corrida than it does the slaughterhouse.

Whatever you feel about bullfighting, there is no excuse for dishonesty – from either side of the debate. And before decisions on a subject are made, it is worth knowing what that subject actually is.

At the moment, the best study of bullfighting in print is the book The Bulls Of Pamplona, centring on the most famous city of bullfighting in Spain, and with a foreword by its mayor. It was authored by award-winning writer and journalist Alexander Fiske-Harrison who spent a year with bullfighters in Spain for research, and a year as a bullfighter himself despite strong moral reservations. (It also has other chapters from the likes of John Hemingway – Ernest’s grandson – and Beatrice Welles – Orson’s daughter – on their forebears’ obsession with the spectacle and forty years of photos from Reuters and European Pressphoto Agency (EPA) photographer Jim Hollander. It is available around the world from Amazon in physical or electronic editions: in the US here, in the UK here, in Australia (and surrounding regions) here, in Canada here, in Spain here, in France here, in the Netherlands as en eBook here, in Germany (and surrounding regions) here, in Italy here, in Mexico and Central America here, in Brazil and South America here, in India here and in Japan here.

(With thanks to Reinhard Keck from Bild am Sonntag, 6Toros6 and Dave Johnson for additional research)

3 thoughts on “Álvaro Múnera: This photo is not what it seems…”