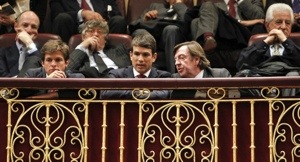 Yesterday, the lower chamber of the Spanish parliament voted on the matter brought before them by 590,000 signatures on a petition to make Los Toros Bien de Interés Cultural, protected cultural interest. Given that the vote was a landslide, 180 votes against 40, with the 107 socialist congressmen abstaining, it seems a given that the senate will nod it through, passing it into law, and, among other things, federally overturning the vastly, and distortingly, over-reported regional ban on corridas de toros, novilladas and rejoneo in the autonomous community of Catalonia which came into effect in 2011.

All I can say in this brief post, is that this is yet another step forward for animal welfare in Europe. And if you want to know why, read the post on this blog – you can find it on the list of posts on the right – about how bullfighting is not a moral wrong.

1 thought on “It is illegal to touch the bulls.”