When perhaps the greatest matador in history, José Tomás, returned to the ring from his inexplicable five-year retirement in 2007, the Spanish press ran with the headline, “And The Myth Was Made Flesh.” At that time, I had never seen him bullfight, and thought it pure journalistic hyperbole. Since then I have and have chosen this headline myself as a result. The Agence-France Presse released this report on his astonishing re-emergence from near-death and appalling injury:

VALENCIA, Spain — Acclaimed Spanish bullfighter Jose Tomas made a triumphant comeback to the bullring Saturday, receiving a standing ovation more than a year after a bloody goring in Mexico that almost killed him. The 35-year-old, wearing a purple and gold outfit, offered his first bull of the night, a 502-kilogramme beast, to the doctors who had helped him recover. He was less successful with his second bull, a 556-kilo four-and-a-half-year-old, but delighted the sell-out crowd of 11,000, many of whom had traveled from overseas to see the spectacle in the eastern city of Valencia. Tomas was seriously gored and almost died in a bullfight April 24 last year in Aguasclientes, Mexico. A 470-kilo (1,000-pound) bull named Navegante, his second bull of the evening, thrust its horn into the muscle of Tomas’s left thigh, puncturing the artery and causing the bullfighter to lose about half of his blood. In September he will be able to fight at Barcelona’s Monumental ring in what may be the last La Merced festival before a bullfighting ban in the Catalonia region comes into force next year. Copyright © 2011 AFP. All rights reserved 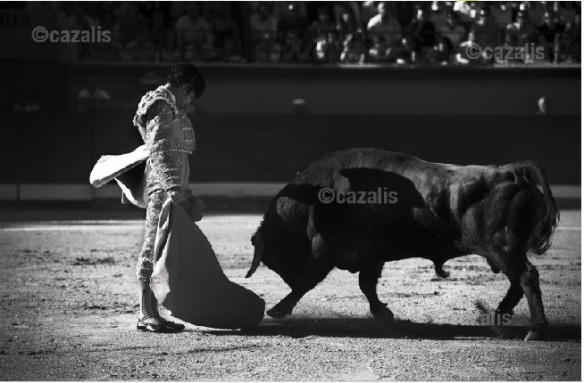 In celebration of this return, I have put below my description of what I believe to Tomás’s greatest corrida de toros, in Jerez de la Frontera in 2009, where he fought alongside the matadors El Cid, who featured in my Prospect magazine article that led to my becoming a bullfighter (available here), and my great friend Juan José Padilla (whom you can read more about in my The Pamplona Post article here).

(I am not alone in holding the view that this was his best fight: both my friend Franciso Núñez Benjumea – whose father’s bulls were fought that day – and my teacher and friend, the great former matador and bullfighting commentator Eduardo Dávila Miura, said the same thing to me after I had been in the ring with Francisco’s cattle on his ranch in Portugal.) This is an abridged version of chapter 13 of my recent book, Into The Arena: The World Of The Spanish Bullfight from Profile Books. A chapter which even the toughest review, the Sunday Times, called “the book’s best set piece.” (And the reviews have been good: “Complex and ambitious… compelling and lyrical.” Mail on Sunday “An engrossing introduction to Spain’s ‘great feast of art and danger’.” The Times “Thrilling… an engrossing introduction to bullfighting.” Financial Times “An informative and breathtaking volume of gonzo journalism” The Herald) I have included photos of Tomás by my friend Carlos Cazalis, World Press Photo Award winner that same year. He has compiled these photos and many others into a book on Tomás which requires votes on the website here for publication. Please pay it a visit. To say Carlos is close to his subject is to understate it. In the photo below Tomás is performing a caleserina, named after Carlos’s grandfather, the Mexican matador Alfonso Ramirez ‘El Calesero’.

After this series, the crowd reached the crescendo of olés on their feet, so their applause for the remate which stopped the bull – a revolera with the cape spinning round his waist at a perfect horizontal – was a ready-made standing ovation. However, it is as we move to the final act of the drama, to the muleta, that I really see why people describe him as the ‘phenomenon’ and themselves as ‘Tomásistas’. He begins with a manoeuvre I have never seen, the estatuario, the ‘statuary’ (as in the art of making statues). Standing in profile to the bull with his feet together, the sword held directly out in front of him horizontally, with the muleta hanging down from it, he glances sideways at the bull some twenty yards away. He gives the muleta a small shake, and the bull, having decided the muleta is a threat, commits to a charge at a full gallop. Tomás then does not move again, trusting that the bull has decided the muleta – one of whose edges flows down along his legs – is the real target. Not looking at the animal, he literally is a statue as it hits the yielding cloth and passes harmlessly through. Bewildered, the bull turns on the other side and, now ten yards away, stares at the man and the cloth. Tomás shakes again, and this time it charges harder and faster, twisting its head in the cloth, seeking to destroy its opponent, the movement putting its own flanks out of alignment so its hindquarters smash into Tomás’s legs, knocking his feet apart. This he corrects with a small shuffle as the bull turns again, this time seven yards away. He sends a thrill of movement through the muleta and the bull charges again, this time rearing its head upwards as it passes through, rather than side to side as before. It is trying to find the main body of the enemy that is mocking it with this lure. Again Tomás does not move an inch, waiting for the bull to turn, which it does. He remains still for a second longer this time – the bull is breathless from the great efforts involved in accelerating its muscular bulk to its top speed. Then he moves the muleta again, and again the bull comes through, rearing, both forehooves coming three feet off the ground. As it turns this time, Tomás shuffles forward to find the right place to cite it from, because now it is a mere three feet from him. As the bull reaches the cloth, he lets the fabric fall from the sword entirely into his left hand, so it goes down to the ground, forcing the bull to foreshorten its charge and stop while turning, allowing him to merely stand and stare at it for a moment, before he calmly walks away to allow the bull to catch its breath. He begins again a few moments later and enters into a series of passes with the muleta in the left hand, sword in the right behind his back, which are so classic in their form, so pure, so wounding in their seriousness – and I know that this will never come across in prose, but their sadness – that I find myself on my feet applauding at the end of each series with the rest of the crowd. There is not one of us who is not bewitched by this man’s artistry and courage. 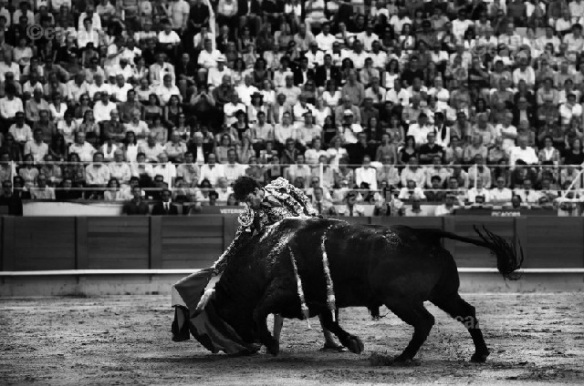 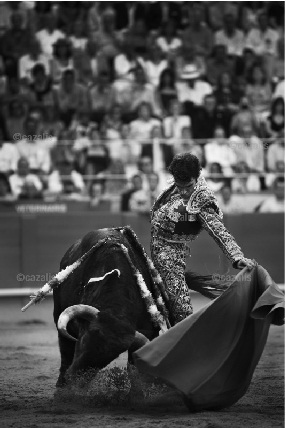 And then, to show the crowd that this was still a lethal artform he was working in, Tomás moved in front of this complicated, unpredictable bull so that he was less than three feet away and erected the cape sideways from his body, like the estatuario but facing the bull rather than in profile, and performed the terrifying trademark of his slain hero Manolete: the manoletina.

The bull charged and reared haphazardly through, again and again and again, and yet Tomás barely shifted his feet and was barely more than a few inches from the bull’s horns, but was not touched by it once, despite the fact that he appeared not even to look at the bull. It was mastery: pure, clean and utterly honest. He killed with exactly the same cleanliness, and again, despite the paucity of the bull for fighting purposes, was awarded both ears of the bull. And again, I do not remember what El Cid did, but he managed to get two ears from a crowd revelling in the great feast of art and danger they had dined upon. He and Tomás were hoisted on to the shoulders of the crowd, along with the farm manager from the ranch of Núñez del Cuvillo, and the president ordered the main gate opened so they could leave the ring victoriously. We left, ecstatic, enthralled and exhausted, into the night, to drink with Nicolás’s crazy friends in Sanlúcar and talk about ‘the bulls, the bulls!’ And I had forgotten about Padilla, my friend, and his embarrassment, and I had forgotten about the suffering of the bulls. For that is the conjuring trick great drama performs: it makes you identify with the protagonist, and to hell with everyone else. Which is fine when you deal in fictions, but what is it when the stakes are real?

The full book, Into The Arena: The World Of The Spanish Bullfight can be purchased at Amazon by clicking here.

1 thought on “José Tomás: And The Myth Was Made Flesh Once More”