On February 24th, 2013, my friend Bomber died. I thought it fitting to write a little tribute of my own to him here and translate the one from the website of the regional newspaper of one of his favourite cities on Earth, Pamplona. 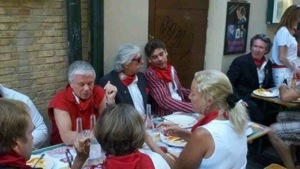 Breakfast on Sunday of the Miuras, Pamplona, July 8th, 2012, among good friends. We had both just run with the bulls, I in my striped jacket, Bomber in his black one. The great bull-runner Joe Distler on Bomber’s left had removed his white tuxedo in case of spillages. (Photo: Jack Denault)

I first met Bomber properly in Pamplona in 2011, when I returned at the insistence of Angus MacSwan who told me I had got the city wrong in my book when he interviewed me for Reuters. That year, when I was flushed with the novelty of the feria de San Fermín, the wonders of running bulls properly, and the sheer excess of Fiesta properly lived, I can not remember how much we spoke, or what about. However, in the months that followed, he was a frequent commenter on this blog, and would often drop me notes congratulating me on the success of my book or my defence of los toros in various pieces of journalism.

His favourite of these was when I went to visit a matador he had met, Juan José Padilla, and who had taught me back in ’09, after he lost his eye in the ring, but was making a come back despite the injury and lack of depth perception.

Bomber had a great fondness for Padilla as a man, a matador, and in one of Bomber’s favourite complimentary phrases, “as a warrior”. He sent me this photo of the two of them together with great pride. 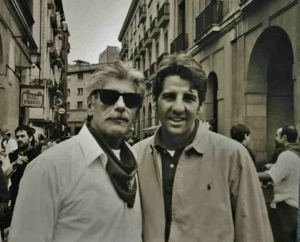 (When I visited Padilla at his house before his comeback, he looked like this. [Photo: Zed Nelson]) 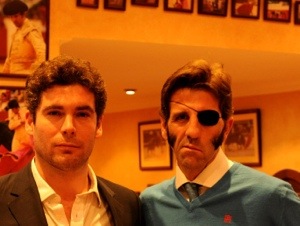 On my first day in Pamplona last year, July 6th, I joined the High Table of American bull-runners for dinner – Joe Distler, Larry Belcher and Bomber – and there Bomber told me how much it meant to him that another generation were coming to Pamplona, were becoming involved with the fiesta de los toros, and – most importantly to a man who at heart was a traveller – were helping to defend the diversity of things and cultures in the world, most especially Spain.

As Bomber and I walked back from that down into the Plaza de Castillo – well, he walked, I staggered from wine, funny how he made the encierro, the ‘bull-run’ the next day and I didn’t – I was reminded of the tragic story I was told about how the love of his life, Goldie, had died prematurely on the operating table, and how the news was conveyed to him in the that very square as he stood among friends outside Bar Txoco, where we always stand after the 8am encierro to ‘talk’ off the adrenaline, and how Bomber had collapsed from grief.

From left to right, Bomber, Joe Distler, Larry Belcher and Me one morning outside Bar Txoco, 2012 (Photo: Jim Hollander)

I cannot claim that I got to know Bomber half as well as I would like, but anyone who knows Pamplona knows that the fortnight that makes up two Fiestas is like three months of normal time. The only consolation for his passing aged 65 is that when he spoke of Goldie, you knew that life was simply so much less bright for him without her. And I noticed in our communications that he spoke of her more and more often after the 2012 Fiesta ended, and then he moved out of their shared home in Garmisch in Germany, posting strangely prophetic photos on Facebook as he did so, saying goodbye and thank you not just to the place, but seemingly to all his friends as well.

I had planned on going to meet him in Germany in the Autumn, but I never did, and that will always be a sadness in my life. Even my father, who only met Bomber a few times, asks after him, just as Bomber made a point of sending me this photo of the three of us.

No one could be better prepared for the final encierro which we all one day will run. In the words of Joe Distler upon reading this post, “Bless and keep you brother.”

And here is what the newspapers said…

Farewell to the elegance in the encierro

Keith Bäumchen, known as ‘ The Bomber’, was a Californian who had been coming to Pamplona for the feria of San Fermín and to run the encierros for over 40 years, died on Sunday

The running of the bulls is in mourning. Keith Bäumchen, better known to his friends as ‘The Bomber’, one of the illustrious visitors from the United States for more than 40 years, died Sunday at age 65 after failing to overcome a serious disease with which he struggled for some months .

This Californian, who lived in Garmisch, Germany and was a tireless traveler, was one of those Americans who did not miss the appointment every July 6th in Pamplona. Following in the footsteps of Ernest Hemingway, he and other celebrity ‘tourists’ such as Joe Distler, Matt Carny, Jesse Graham, Chris Humphrey, Noel Chandler and Davy Crockett (descendant of the legendary hero of the Alamo) arrived on calle Estafeta [the main street of the bull-run] decades ago and have not moved from there since.

‘The Bomber’ walked into Pamplona for the first time in 1968, when he was 20, and he was immediately recognisable by his long gray hair and Ray-Ban sunglasses like some Hollywood star. On Sundays dressed up, American style, to run with the bulls. According to him, it was because of the American custom of going to church that day wearing a suit, but some of his teammates on the run also do so out of respect for the Miuras, the breed of bull that habitually runs on Sundays.

It was to be common to see him and the entire American colony in its ritual reunion after the run in Bar Txoko, one of the few bars that still has the loud music at the end of the famous San Fermín course, to discuss the what had gone on that morning.

Bomber said that for him, the nine-days of San Fermín were “a gift”, and claimed that from the first moment he arrived at the capital of Navarre, he knew he had found no other place where you could breathe the same festive atmosphere as San Fermín. For him, coming every year to Pamplona was a “celebration of life”.

A few years ago Bäumchen lost his wife Goldie, with whom he was deeply in love. It was during Sanfermines. Despite undergoing heart surgery, she asked her husband to go to Pamplona, a very special place for them both. Although she initially survived the operation, she died the next day of an aneurysm. To Bomber, nothing was said until he had finished running with the bulls.

The 2013 Sanfermines will be a visitor less, but his memory will be present in the rest of his compatriots and friends who love their fiestas in Pamplona and visit Pamplona San Fermín each and every year.

The article in its original Spanish can be found here. The accompanying photo gallery here.