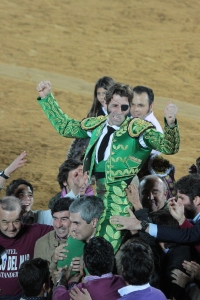 Juan José Padilla is a Spanish matador whose generosity of time, spirit and courage allowed much of my book, Into The Arena: The World Of The Spanish Bullfight, to exist (click here to purchase at Amazon UK, and here for Amazon US). And, without him, as many critics pointed out, it certainly have been as widely praised as it was (nor shortlisted for Sports Book Of The Year 2011, I suspect.)

Juan José was the first matador I met in Spain. It was he who took me to my first training session with cattle at the ranch of Álvaro Domecq, ‘Los Alburejos’ (and then onto his own nightclub ‘La Lola’ in Jerez de la Frontera afterwards). This – including the club – forms chapter three of the book. He was also with my when I first entered the ring myself at the ranch of Fuente Ymbro (chapter four), and much, much more besides.

So, when I heard about his horrific goring, detailed in the post here, in which he lost his left eye I knew that I had to be present when he inevitably returned to the ring.

However, no amount of confidence inspired by Juan José’s words when I visited him at home two days before the fight, nor seeing the calm beauty of the bulls in their natural wilderness the day before that, could prepare me for his triumph in the ring, ending with him being carried out on the shoulders not of the crowd as is usual with a great success in the plaza, but on the shoulders of the top matadors of today – who had gathered to watch – and now jockeyed to carry the Maestro themselves.

However, should you wish to know more of Juan José, read Into The Arena, and then go and see him in Valencia on March 16th alongside the No.1 matador in Spain, José María Manzanares or they will both be fighting at my own favourite ring, in Seville at the April Fair, on the 20th and again, with his old friend Fandi (the technical no .1 in Spain) and El Cordobés on the 28th (you can buy tickets here). I would suggest that in Seville those on a budget stay at the Hotel Adriano (website here) next to the bullring, those who want old beauty stay with my friends at the Hotel Las Casas de la Juderia (website here), and those who prefer the boutique, with my friends at the Hotel Corral del Rey (website here). Direct flights from London are by Ryanair and Easyjet.