‘The North Of Castile’

The Joy Of The Thrill

Lungs burning, vision fuzzing, heart thumping and hands shaking, I stood watching and chatting with my companions in the street, Josechu Lopez and David Garcia, as the last bull moved up the street last Tuesday, in the antepenultimate encierro of the oldest feria of bull-running in the world, and the last time I expect to find myself sharing the asphalt with my favourite animal ever again.

It is not that I have lost my love for the bull or my affection for encierros, ‘bull-runs’: my admiration for this meeting place for man and beast is entirely undiminished. Nor is it the decrepitude of old age or excesses of an indulgent lifestyle that are pulling me out as I enter my mid-40s: I could still clock a three-and-three-quarter hour marathon in Mont Saint-Michel in France last year, and did my finest taurine runs ever the year before that in such rarified places as Funes and Falces.

Midnight Run – Alexander Fiske-Harrison, far right, running on the horns of a bull in a nocturnal encierro in Funes in Navarre in 2017

No, ten years after my first ever encierro – with Miuras, in San Fermin – I have had to admit that my personal experience of running alongside, and occasionally in front of, such animals has ceased to deliver a pleasure that outweighs the ultimate risk. It is not that, to quote the great B. B. King, “the thrill is gone”, but that the joy in that thrill has.

This is not to say that my taurine activities are over: far from it. Through my organisation Bullfighting Andalusia, I am spending more time with fighting cattle than ever before. Our inaugural event was bringing together a quite spectacular set of people after the largest US tour operator in Pamplona, Running Of The Bulls, Inc., contracted us for their clients from the richest sport on Earth, the board of directors of a certain motor-racing association. We then brought up to Navarre a team of friends and companions from Seville, headed by my old Maestro, the matador Eduardo Dávila Miura, along with Chapu Apaolaza, spokesman for the Fundación del Toro de Lidia, ‘Foundation of the Fighting Bull’ – with whom I am also working – and we all got in the ring. It was quite a day. 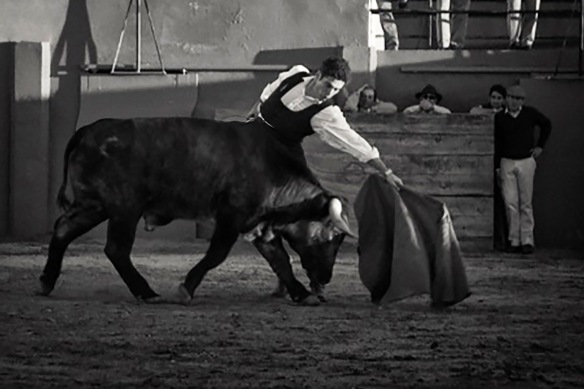 However, while I still have the urge to explore the mysteries of that combination of high-risk technical labyrinth and representational artform that is toreo – so badly mistranslated into English as ‘bullfighting’ – I am no longer drawn to matching my feet to the hooves of these beasts to hurtle pell-mell down the streets. As I sat in Cuéllar sharing dinner with Jokin Zuasti, perhaps the last of that group of sanfermineros known as, for better or worse, los divinos, I realised that I was only ever half the “dynamic aficionado” he still was, and less than a quarter of what he had been. As I showed our other dinner companions from the United States a photo of him from 1977 running alongside our friend Joe Distler, and our late friend Julen Madina, along with the wonderful Chema Esparza and led by the teacher of them all, Tito Murillo, I knew I had reached the end of my love of being part of the herd.

In part, there is no denying, the risk is a part of this decision. The day before I first arrived to run, the Feria de San Fermín in Pamplona in 2009, a runner was killed there, while the day after I left my final runs at the Feria de Nuestra Doña del Rosario, ‘Fair of Our Lady Of The Rosary’, this week someone was killed there as well. And in the middle of this black-framed picture of a life on the moving foot with los toros was 2014, that savage year fourteen runners were killed in encierros across Spain. Death runs alongside us all in the encierro, and although the cape of Fermin or the grace of Our Lady may intercede, the final decision, as always, lies with his horned children. 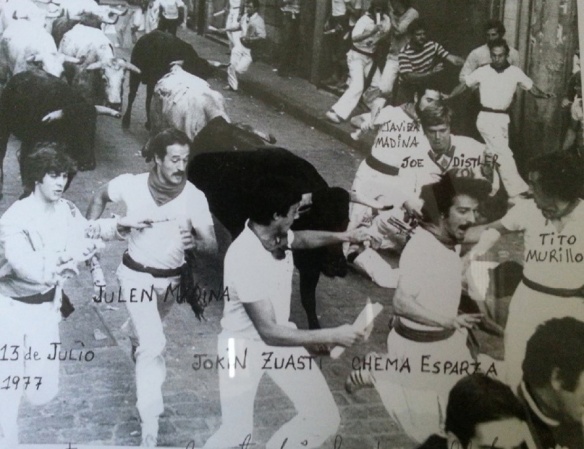 This year, in the town where I have brought so many to witness and partake its combination of holy gold and living leather (from world-class jockeys like Richard Dunwoody to Peers of the Realm like Lord Westmorland, from international war correspondents like Jim Hollander of EPA and Angus MacSwan of Reuters to international soldiers like Captain Dennis Clancey and Sergeant Connor Quinn of the 101st Airborne Division) I brought my fiancée, Klarina Pichler, an Austrian polo player ranked amongst the highest in the world, and whose Polo Andalusia and Riding Andalusia are sister organisations to my ‘toreo for tourists’. And when a man decides to make a family, as I have, a greater responsibility beckons. As the old hunter’s credo goes, “do not shed blood for fun.” Now I must extend the definition of such blood to my own.

And yet I still must thank the encierros in general, and Cuéllar in particular, for all they have given me. This year I was made Extranjero del Año, ‘Outsider of the Year’, in the place of the oldest encierros of all. And even though the ceremony itself was cancelled as the new mayor Carlos Fraile looked after with two gorings in that morning’s encierro, still present were those who were first with me when I arrived in the town, including many foreigners led by the ex-rodeo champion of Texas Larry Belcher, local runners by Dyango Velasco and pastores by Enrique Bayón Brandi and the hospitality that houses us all, Elisa de Frutos of the Hotel Mesón San Francisco.

As I step down as runner and away as foreigner for others to take my place in that great event, I say one last time, “¡Cuellaranos, a por ellos!”*

(*”Citizens of Cuéllar, up and at ’em!” is the closest I can come to a translation of this town motto.)

Alexander Fiske-Harrison is author of the William Hill Sports Book Of The Year winning, Into The Arena: The World Of The Spanish Bullfight [Profile Books, 2011], editor and co-author – with the Mayor of Pamplona, Ernest Hemingway’s grandson John, Orson Welles’ daughter Beatrice and many others (including Joe Distler, Jokin Zuasti, Larry Belcher, Julen Madina and Josechu Lopez mentioned above), The Bulls Of Pamplona [Mephisto Press, 2018], and the forthcoming Juan José Padilla: Man, Matador Myth…