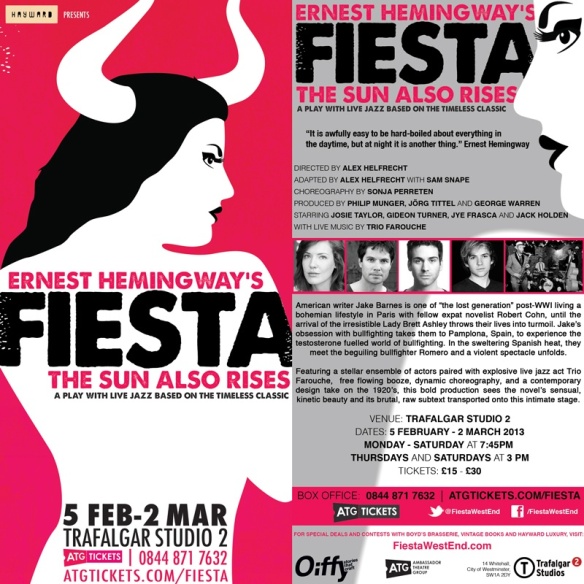 Today sees the final performances of the West End show, Hemingway’s Fiesta (The Sun Also Rises). If you have not been to see it, good luck on getting tickets now – I was told by the producer ten days ago that they only had ten tickets left for evenings performances, and a few more for matinées (there is one today.) There’s always a chance: details are here.

I very much like the cast and crew. I first met with them at the best tapas bar in London, Capote y Toros on the Old Brompton Road, to ‘assist’ the production as detailed in The Daily Telegraph.

Ernest Hemingway’s granddaughter Mariel will attend the first night of Fiesta (The Sun Also Rises) at the Trafalgar Studios in Whitehall on Thursday night.

The cast of the show, which is based on his first novel, about bullfighting, were given tips on the Spanish “art” by Alexander Fiske-Harrison, an Old Etonian, who trained as a matador.

“I tried to convey the essence of what it is to be a bullfighter,” says Fiske-Harrison, who is courting Antalya Nall-Cain, the daughter of Lord Brocket.

I met them again at the First Night after-party at Boyd’s Bar in the old Grand Hotel and at the same place venue last Friday to listen to their excellent on-stage supporting jazz band Trio Farouche.

So I was, in some ways at least, happy when The Spectator told me they couldn’t fit my review in. The production has had largely excellent reviews, as well as selling out. However, I am most inclined to agree with Michael Billington’s review. It is worth saying that we saw the play the same night, and even discussed it before, during the interval and after. His award of three stars seems about fair, and not just because that was the same number my own last venture on stage got in Billington’s review.

Anyway, given that it is now far too late for any negativity in my piece to have an effect, I hope the producers, director, cast and crew take this in the spirit of honest appraisal it was intended. After all, being “condemned to being merely very good” is still very good, n’est-ce pas? 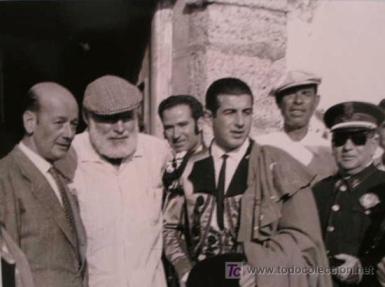 The Sun Is Now Set

I first read Fiesta, Ernest Hemingway’s debut novel published as The Sun Also Rises in the US, in 2008 while researching for a magazine article on bullfighting for Prospect magazine (online here). At the time I was also rehearsing to act in a play I had written in a theatre in London’s West End. Which was why I got talking to another cast of actors in a nearby pub who told me they were ‘workshopping’ a stage adaptation of Fiesta the Old Vic.

The vagaries of a life are strange, and as the scenery came down on my play, and I was once again unemployed, my literary agent suggested I turn my magazine article to a book on bullfighting and so I set of to Spain. During my two years, I went from spectator to participant, briefly becoming a torero myself.

Since publishing that book, Into The Arena, I have returned to Spain many times, sometimes to run with the bulls in Pamplona (as described in The Spectator last July) – often alongside Ernest’s grandson, John Hemingway – sometimes to get back in the training ring (no animals harmed) alongside matadors like the great Cayetano Rivera Ordóñez – great grandson of Cayetano Ordóñez, on whom the matador in Fiesta, Pedro Romero is based. (In fact, the book was originally drafted as a non-fiction short-story under the title ‘Cayetano Ordóñez’.) END_OF_DOCUMENT_TOKEN_TO_BE_REPLACED 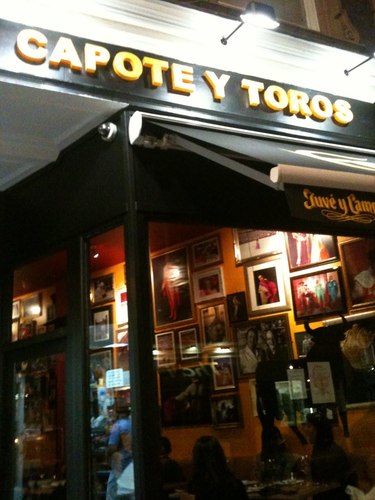 Back when my book, Into The Arena, was published last year the Reuter’s editor Angus MacSwan decided to interview me at a new, bullfighting-themed tapas bar in South Kensington called Capote y Toros (‘cape and bulls’).

All the food was excellent, especially the gambas al ajillo – sizzling prawns in garlic. It also has the largest selection of sherries in London: not only the standard finos, olorosos and amontillados of Jerez de la Frontera and Puerto de Santa María, but also the manzanillas of Sanlucar de Barrameda. CyT is also the only place I have found in London with proper jamón ibérico de bellota – the pata negra name you sometimes hear refers to the distinctive black hooves of the ibérico breed. They import the 5J from the town synonymous with jamón: Jabugo.

So when a production company asked for a good venue in which to talk about bulls, this is where we ended up, under the photos of all the great matadors alive today from Curro Romero to Morante de la Puebla (its name is capote after all.)

While I was there, the restauranteur–aficionado Abel Lusa came along to say hello. He recently opened CyT and also owns the more formal tapas restaurant Tendido Cero across the road, and the justly famed Cambio de Tercio a few doors down, a favourite of the likes of Rafa Nadal when he’s in town and most recently graced by the Duchess of Cambridge. 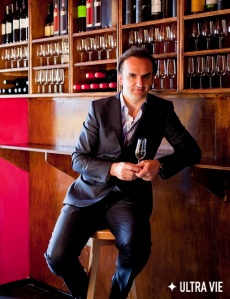 (I was meant to eat there with Giles Coren so he could review it along with my book as as follow up to his piece on my training as a bullfighter, but they don’t do lunch, so we went to 34 instead.)