Yesterday, the Spanish regional newspaper El Norte de Castilla – ‘The North of Castile’ – published my third annual ‘thankyou-note’ article about the town of Cuéllar (original Spanish here), in Castile and Leon for its generosity during its feria – my favourite – and its incredible bull-runs. I cannot recommend the town enough to visitors and tourists – especially during the feria, where the bull-runs are as spectacular to watch as they are to participate in (as I have written before for the Financial Times.) The best place to stay is the Hotel Mesón San Francisco (click here to book), and other details of the town are in the article below. It is an hour and a half’s drive from Madrid, or a twenty minute fast train to Segovia and forty minute taxi ride… AFH 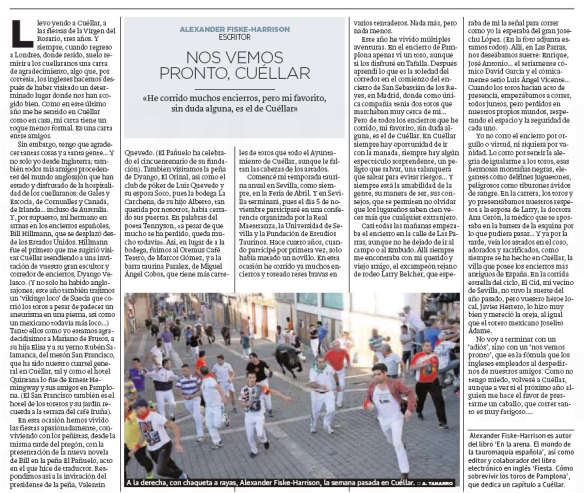 As it appeared in the paper…

“I have run in many bull-runs, but my favourite is, without doubt, the one in Cuéllar»

For three years now I have come to the heart of Old Castile for the Fair of Our Lady of the Rosary of Cuéllar, and each year before, like a polite but unfamiliar guest, I would write a thank you letter as is the custom of we English. (2012, 2013) Now that I feel know Cuéllar a little better, even if not each of its inhabitants personally, and I can address you less formally, as real friends are allowed to do. And yet there are still so many thanks to be given, and not just from myself in England but also from my other friends whom came from around the ‘Anglo-Saxon’ world this year: from Australia and from Scotland, from Canada and from Wales, even from Australia (you have had celts from Ireland in your Irish pub since before I first came.) And of course,  your great sculptor of, historian of and runner of encierros, Dyango Velasco.

(From outside the Saxon world we also brought a crazy Viking from Sweden – who ran with your bulls despite an aneurysm in his leg – and an even crazier Mexican, who never normally runs, except he found himself lost in the forest among the bulls – the blind leading the lame among the lethal.)

We all of us wish to thank Mariano de Frutos, his daughter Elisa and her husband Ruben Salamanca at the Hotel Mesón San Francisco, which was our headquarters in much the same way Hotel Quintana in Pamplona was once that of Ernest Hemingway and his friends – it is also the hotel of the bullfighters, some of whom I still know – and gardens on calle San Francisco are like the outside tables of the Café Iruña, attended with divinely inspired patience by Enrique and Cristina. However, we also ventured beyond our querencia – ‘lair’ – there, to your peñas, beginning on the afternoon of the Pregón with Bill’s presenting his new novel – with me as translator – at El Pañuelo at the invitation of its president Valentin Quevedo on its fiftieth anniversary for CyLTV and various assembled journalists. There is also always Dyango’s peña el Orinal, and the even nameless poker club of Luis Quevedo and his wife Soco since their son Alberto’s Bodega La Carchena has closed. In the words of our poet Tennyson, “though much is taken, much abides.” So instead we went to the flamenco of the Café Theatre Oremus of Marcos Gómez and the taurine bar Paralex of Miguel Ángel Cobos who has more carteles than your town hall, but no bull’s head (yet.) 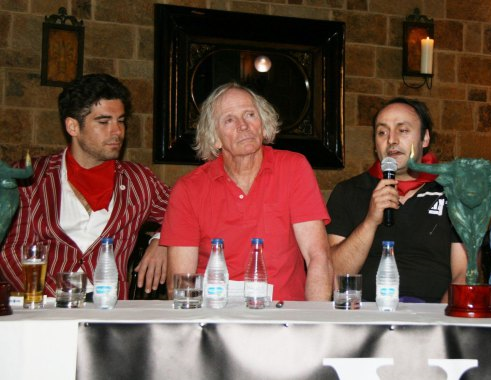