The Breeding of the Toro Bravo

The author running with a prototypical bull of Torrestrella, a cross of the encastes, ‘breeds’, of Juan Pedro Domecq and Núñez, in Pamplona in 2011. (Touching the bulls is illegal. However, as can be seen below, the author was balancing before slipping between this bull and his brother behind him.) 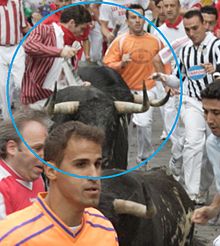 I was recently commissioned by Running Of The Bulls, Inc. – the United States’ largest tour operator to Pamplona for its annual Fiesta de San Fermín – to provide some information for their clients on the bulls themselves.

I was asked for a light, introductory, Hall of Fame of Bulls in Pamplona. However, since I also work with the industry body the Fundación del Toro de Lidia, ‘Foundation of the Fighting Bull’, I took this article more seriously than they expected. As a result, by the time I was halfway through writing I was already several thousand words over my limit…

The full written version is here, minus a series of specially filmed interviews I did for them around the world which are available only on their site, www.runningofthebulls.com.

In it I discuss about a dozen ganaderías, ranches that breed bulls registered under Spanish law as being of the fighting bull ‘race’.

However, there are many, many more. According to the Ministry of Culture’s latest figures, published Spring 2018, there are 1,329 ganaderas de reses de lidia, ‘breeders of fighting cattle’, in their registry.

These supplied the past season’s 1,553 bullfights of all varieties. These include novilladas with novice matadors, rejoneo from horseback and full corridas in which 1,2 or 3 full matadors face 6 full-sized toros bravos, ‘brave bulls’, and various combinations of these types of event.

(These combinations can lead to media confusion. Although there were only 387 pure corridas last year, there were a further 370 events in which at least one matador faced a toro bravo as part of the event.)

These were serviced by the 10,959 licensed bullfighting professionals in Spain, 825 of them being matadors.

And this is all alongside the 17,920 popular festivals involving cattle such as the encierros, ‘bull-runs’, for which Pamplona is famed.

It is a big thing, this mundo de los toros, ‘world of the bulls’. END_OF_DOCUMENT_TOKEN_TO_BE_REPLACED