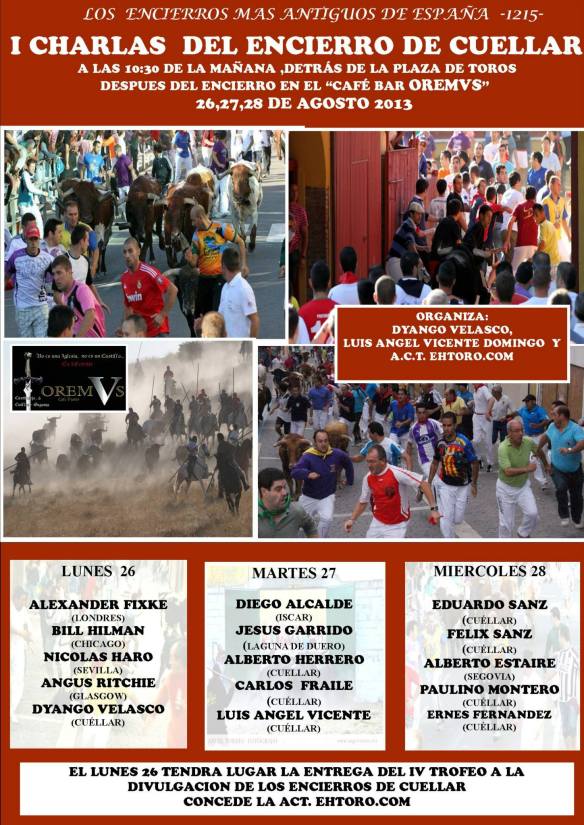 I have been getting busy undoing the damage of Pamplona – barely a good run among five, injuries from that one, a habit of craving cognac at 8.05 a.m. – and began a regime of training for the infinitely more serious, and ancient, encierros, ‘bull-runs’, of Cuéllar in Old Castile which as I described in the travel section of the Financial Times (link here) (for which I am receiving my prize as stated – with odd spelling – in the above poster, along with my friend Nicolás Haro who took the photographs for the article.) I may be making my way out of the world of the bulls – as I’ve written here – but there’s still time for one last perfect run, one last job, one last score…

Meanwhile, my writing on the topic still trickles out, publication lags being what they are, this time in ‘The Great American Bar Room’ series in The American Spectator, which is finally available online here. It tells the story of an morning, afternoon, evening and night spent drinking with the great one-eyed matador, my old friend Juan José Padilla (before he lost his eye. How he lost his eye, and came back to bullfighting without it, I wrote up for GQ magazine hast year here.) 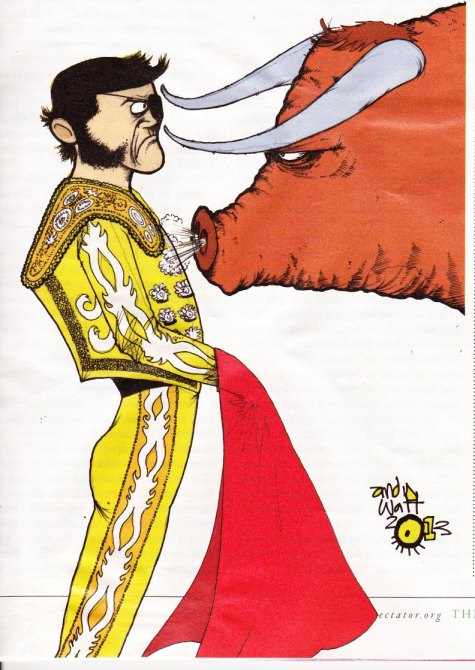 Reading that account of my time in Spain, at the very beginning my journey that I recounted in my William Hill Sports Book of the Year shortlisted Into The Arena: The World Of The Spanish Bullfight (details here), I realise again how much I owe to Andalusia in general, and particular to the city of Seville which gave me everything. Which is why, in its hour of need, I was particularly glad that my rewrite of one of the bestselling guide books in the world, the Wallpaper* magazine City Guide, published by Phaidon Press, has just come out.

These guides have sold well over a million copies. So when I was asked to “update” their Seville edition – replacing about half of the original text- I thought it would be an excellent chance to repay old friends, This is in no way dishonest, nor a conflict of interest: these friends simply are my friends because their establishments are the best in town. Sadly, they do not always fit the aesthetics of ‘urbane sophistication’ that Wallpaper* demands for its photographically-based pages. So they are mainly mentioned in the text. However, their is no simply no denying that if you go to Seville and want an apartment, you should go to my friend Kinchu’s apartments at Almansa 11 (they did get a photo, p.20, website here.) 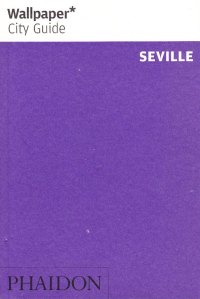 If you want a cheap hotel, stay at the Hotel Adriano by the bullring (from here on in, click on names for websites). If more expensive but traditional, Hotel Las Casas de la Judería (p.22-23) in the Barrio Santa Cruz of which my friend the Duke of Segorbe still holds a part. If boutique, Hotel Corral del Rey (p.30) belonging to the Scott brothers. And if old school grandeur, the Hotel Alfonso XIII (p.24-25) where we had such a great party in June…

The nicest restaurant near the bullring is that owned by Horacio, after whom it takes its name (and one of the few to speak English) on calle Antonio Diaz. Around the corner on calle Arfe is the most authentic of the small bars in town, Casa Matías which often has flamenco – sometimes sung by the moustachioed Matías himself – in the afternoons (the true flamenco, the cante jondo, the deep song, rather than the dance spectacle which tourists crave.) For the best old school atmosphere with your tapas, go round the corner again to Hijos de E. Morales on calle García de Vinuesa. For the finest ham, the jamón ibérico pata negra, go to Bar Las Teresas in Barrio Santa Cruz on calle de Santa Teresa, or for more modern tapas, Vinería San Telmo, owned by the charming Juan Manuel Tarquini on paseo Catalina de Ribera, also in that quarter. (These all feature on p.48 of the guide. None require bookings.)

Finally, for the true heart of Seville, go to La Maestranza, the great plaza de toros of Seville, where corridas de toros – it is not a bull-fight, nor is it a sport, as I argue throughout this blog – are held in the mini feria of Saint Michael on the last weekend of September, with the best young novice matadors on the Friday evening (27th) and some of the finest matadors on the Saturday and the very best on the Sunday. (For anything from matador’s swords to wallets made of toro bravo leather – go to the torero’s tailor, Pedro Algaba on calle Adriano, part of the Maestranza building itself – on p.70 of the guide.)

And there is so much else to see in Seville: every building of historic beauty fragranced by the iconic orange trees that line the streets; and the vast fallen bull of the cathedral in the baking sun, with its belltower, La Giralda – once the minaret of the Moorish mosque – standing matador-proud on the skyline; the art galleries and museums, the exquisite Moorish gardens of the Alcazar palace and the eclectic botany of the original Empire on which the sun did not set in the Park of Maria Luisa… and the beautiful river Guadalquivir carving through it all.