A portrait of me by Nicolás Haro

I wrote on this blog just before the April Fair that I first came to Seville on the back of a broken relationship ten years before. My dates were wrong: it was in June. This June, I found myself back again.

Seeing things through different eyes, a realisation came over me, which I have expressed in my column in today’s issue of Taki’s Magazine, centring as it does on the saddest story in cinema, Orson Welles. Even the title is a quotation from the great man: ‘The Second-Hand Men’. As I write there,

Welles either couldn’t admit to himself or couldn’t say out loud that the more pressing issue is not just becoming audience rather than artist, but in being fêted for just sitting in the stands and reveling in that. At this point one has slid from the morally and aesthetically questionable world of the voyeur to the far more reprehensible one of poseur.
(To read the column in full click here.)

Cf., the photo above…

At the same time, fate conspired me to spend a little time with all the people who helped me make, and themselves made up, my book on this beautiful and strange land, Into The Arena: The World Of The Spanish Bullfight.

As I describe in the column, I stood in front of the last lot of Saltillos ever to exit the gates of Félix and Enrique Moreno de la Cova’s ranch ‘Miravalles’, alongside my former Maestro, the ex-matador Eduardo Dávila Miura. And given what I used to be able to do… 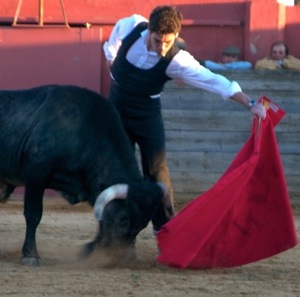 Me with a Saltillo bull in 2010 (Photo Nicolás Haro)

… what remained of my bullfighting technique was a rather poor thing… 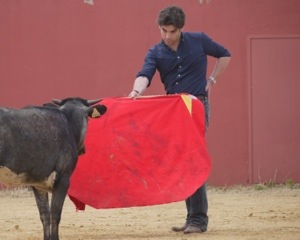 Me with a Saltillo becerra in 2013 (Photo: Miguel Santos)

Me with a Saltillo becerra in 2013 (Photo: Miguel Santos)

However, it was still an emotional day with a large audience, many toritos and vaquillas, young bulls and cows, for the toreros practicós, ‘amateur bullfighters’, and a beautiful long lunch at the former Saltillo finca ‘La Vega’ afterwards, even if I was not in any condition to enjoy it as much as I should.

The last capea of Saltillo at Miravalles (Photo: Miguel Santos)

Having realised that I was now just a torero on paper – a second-hand guy on the sand – I decided to quit while I was still ahead. (The bulls gave me a great deal, and I gave a great deal back, but they took something as well.)

A portrait of me by Nicolás Haro

First, I paid a visit to my old friend and frequent collaborator, the photographer Nicolás Haro, who took these portrait shots while I could still fit into my traje corto. Hopefully, Nicolás and I will soon be collaborating once more on a book about the psychological link between horses and men, a centaur project to balance our minotaur one (Nicolás took the black and white photos for Into The Arena.) The initial collection of Nicolás’s photos for this project have already been nominated for one of the most prestigious international photographic contests held in Spain: PhotoEspaña.)

I will, once I have completed my new novel, finished the task of washing the blood from my hands with a book on what Teddy Roosevelt called “the beast of waste and desolation” and Man’s Best Friend: wolves and dogs.

That said, as you can see from the cover of this new book, Olé! Capturing the Passion of Bullfighters and Aficionados in the 21st Century, due to be published in the United States in the next few weeks, I have been writing on the bulls up to the very last minute (my chapter also contains great photos by Nicolás.)

Before I left, I even got to say farewell to that one-eyed gladiator, my first teacher, Juan José Padilla, when he fought in the feria de manzanilla in his home town of Sanlúcar de Barrameda. (These photos are by me.) 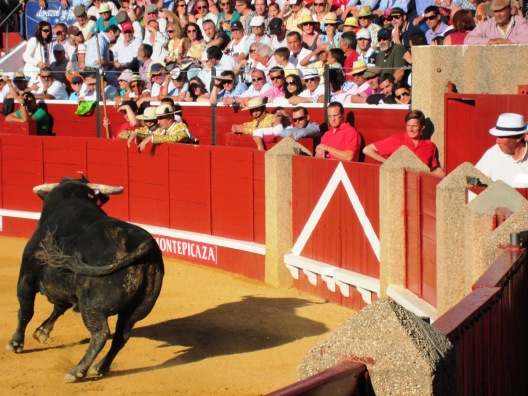 And then a last adíos to that matador de arte from the greatest of the taurine dynasties, my dear friend Cayetano Rivera Ordóñez, who was my chauffeur from Seville to Ronda so I could talk about Orson Welles, whose ashes are interred at his family home.

So, all that remains for me to do is say farewell to the streets of Pamplona in July with a couple of runs among their bulls, and those of that other, and more ancient, bull-running town Cuéllar in August (I wrote comparing and contrasting them in the Financial Times last weekend, linked to here.) I even have an invitation from Cayetano to join him in the ring (on a ranch in Ronda) one last time for “amusement” on the morning of the Feria Goyesca. We will see…

However, such amusements and formalities to one side, I’m done here. “There’s a world elsewhere.”

To read my Takimag column in full click here.

P.S. In a neat and final symmetry, having reached my highest point on talking about the bulls – the speech I gave to the Reform Club at the request of, and beside, the Spanish Ambassador – I have now gone full circle and been invited to talk about the bulls at my old school, Eton. I wonder if they know I’ll be running my last runs in my Eton College Athletic Club Colours blazer (400m). It’s the striped one on the right – I have my hand on the bull for balance – in this Reuters photo in 2011.