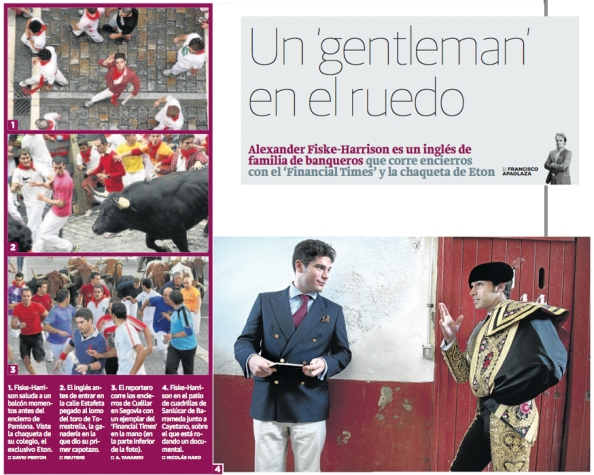 A couple of weeks ago the eleven newspapers of the Vocento Group in Spain – El Correo, El Diario Vasco, El Diario Montañés, La Verdad, Ideal, Hoy, Sur, La Rioja, El Norte de Castilla, El Comercio, La Voz de Cádiz, Las Provincias – ran the following interview with me. The only exception was ABC which ran this one a few weeks before.

A Gentleman In The Ring

Having crossed through a dimensional portal, suddenly he appears in the bull-run of Cuéllar (Segovia), in an out-and-out race with Spanish fighting bulls, a copy of the Financial Times rolled up in his hand. With each stride, Alexander Fiske-Harrison, English gentleman, writer, actor and reporter for the British press spans the huge distance between his world of the cultural and economic elite of London and the bull-run of Cuéllar with its dust, hooves, horns and shoe leather. This is the story of how one man crossed through the door of these parallel universes and then relayed it in the first person to the most anciest newspaper in the City.

Now, perhaps, the Financial Times will give a respite to the workhorse of Spanish debt and point instead to Spain’s oldest bull-run. Perhaps the best part of the story is the signature on the article. Fiske-Harrison is not the type of tourist who cannot distinguish a cart-ox from a fighting bull, but is an amateur bullfighter whose curious journey began many years ago while search of new cultures and strong sensations. What he found was very far from his life in a grand English family – a line of bankers – with its studies at Oxford, its games of rugby, horses, shooting and the exclusive red and white athletics blazer of Eton College, where Prince William and David Cameron also studied. END_OF_DOCUMENT_TOKEN_TO_BE_REPLACED