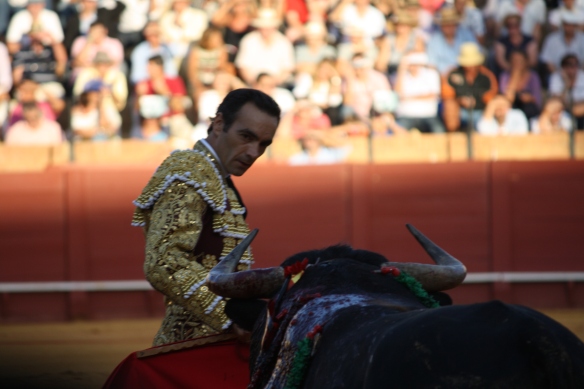 The ban on formal Spanish-style bullfights, corridas de toros, in the autonomous region of Catalonia came into de facto effect last night with the final corrida in Barcelona’s great bullring, La Monumental. (The ban, voted for in the regional parliament in July 2010 actually begins in 2012, but the “season” is now over”.) At the time, I was in transit back from another, very different Spanish city, Seville. (Apologies to Fiona Govan at the Daily Telegraph for not available for comment as a result.)

I had flown out to Seville to fight – non-fatally – on a ranch nearby for the cameras of NBC Nightly News with Brian Williams in the US, before going to watch a corrida in the true heartland of bullfighting in Spain, it’s oldest major bullring, La Plaza de Toros de la Real Maestranza de Caballería de Sevilla (1749), then NBC was going to fly on to see 20,000 people pack into the century old Barcelona ring to watch Spain’s greatest matador, José Tomás, perform as the curtain fell on that part of the mundo taurino.

After NBC pulled out due to production problems, I took my girlfriend to the city I now regard as my second home after London and remained safely in the stands.

On Friday night, we saw a mediocre set of bulls of the second rank, fought with courage, determination and a lack of flair and technique by equally second-rank matadores. Given that we were sitting front row in seats generously donated by the bull-breeder Enrique Moreno de la Cova, it left a bad taste in my mouth. If the faena, the final part of each bull’s fight with the muleta or small red cape, has no art, then watching the picador drill his lance twice into each bull less than six feet in front of you can become the dominant visual memory. An evening out with that most garrulous of British aficionados, and the British Prince of Pamplona, Noel Chandler, did much to alleviate this.

Luckily, on Saturday night, we watched the Seville professional- as I think of him – El Cid fight his first bull with a blithe confidence which built up to a complicated brilliance using a sense of timing and grace of movement which I thought he had lost.

Cid was justly awarded an ear. And even though the subsequent four bulls were weak, and the French matador, Sebastian Castella, was unjustly unpopular with the crowd and became petulant in return, Alejandro Talavante managed to take an ear on his second bull, the last of the day, meaning that this corrida began and ended with some beauty and I walked into the night feeling refreshed, rather than psychologically soiled with dried blood as I had the night before. Seeing a good flamenco tablao at Los Gallos afterwards helped cement this. It may not have been the duende, the ‘dark spirit’ of Morante de la Puebla with his cape and then the cante jondo, the ‘deep song’, but it was not a thousand miles away…

It particularly pleases me that El Cid was so good, given that he gave the first truly exceptional performance in a bullfight I had ever seen, tipping my ethics in favour of the artform and leading me to write my essay in Prospect magazine, that eventually led to my book Into The Arena.

It is because of that book that NYT-IHT Spain correspondent Raphael Minder contacted me as he was writing an article on the economic crisis and the bullfight, which was published on Sunday in the International Herald Tribune and the New York Times under the title, ‘In Catalonia, a last day of bullfighting‘. In that article, he quoted me on my view that using UK taxpayers’ money to fund a Spanish spectacle they dislike is undemocratic.

I am aware that this is a view which, like so many others I hold, puts me at odds with more fervent British and American aficionados. They see such stating truths as damaging to the “interests” of the world of the bulls, as though there were some party line to be towed and that all public statements must be propaganda. In the case of some, their fervour is indistinguishable from their animal rights campaigning counterparts.

(My stance apart from both groups often puts me in interesting positions: for example, on Sunday September 18th, while in Nîmes, France, watching José Tomás – a week prior to his Barcelona “showstopper” – I was forced to resign from the Club Taurino of London at exactly the same time as the League Against Cruel Sports launch a personal attack on me on their website, under the title, ‘Fisking Harrison’, with the words “Alexander Fiske Harrison is one of Britain’s foremost defenders of bullfighting…”)

I have expressed in interviews elsewhere my views on Barcelona’s departure from the world of the bulls (e.g. in this CNN interview ): it is pure politics and an attack not for animal rights or welfare, but against the political unity of Spain. Otherwise, why is it still legal in that region of Spain to set fire to the horns of a bull and run it to death in the street – a Catalan national pasttime called correbous – but not to fight it with a sword and cape in the manner of Castile and Andalucia? It seems that the unifying work of the other El Cid is being unravelled… 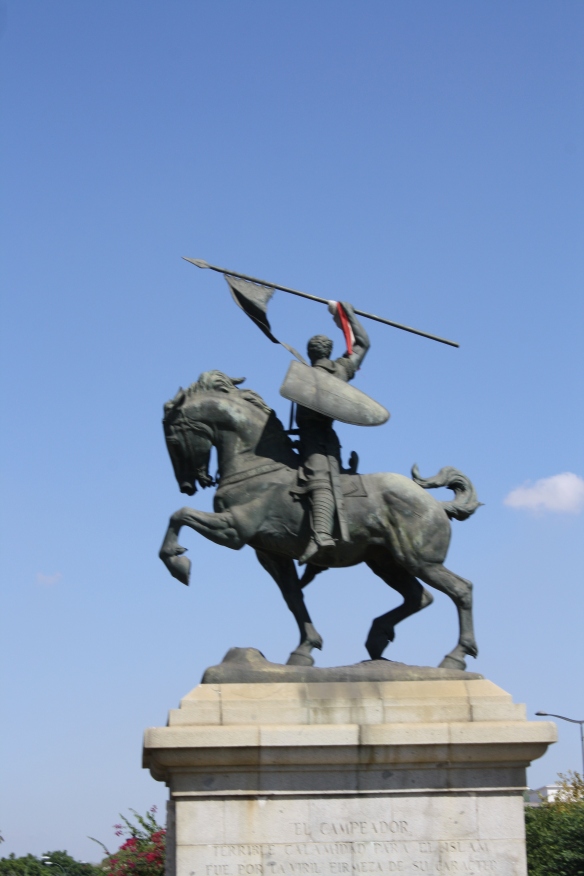 The statue of the original El Cid in Seville
(Photo: AFH personal collection)

Anyway, I thought that I should publish a few of the other things I sent to Mr. Minder for his article, not least clarifying why I do not think subsidies help.

I’m interested in the subject of how the crisis has affected bullfighting and was thinking about trying to do something on that ahead of the Monumental fight.

I’d be delighted to help. The Ministry of the Interior’s figures make for interesting reading.

Looking back at the Golden Age (or rather, just after, when Hemingway was writing), the magazine “Toros y Toreros” for 1932 lists 219 corridas for that year and also the 870 “novilladas” with novice matadors. These include a lot of festivals like becerradas, with female cattle, that would now be counted as minor festivals (for comparison there were 11,605 minor festivals in 2010.)

Of course, the most interesting thing in the debate is really the amount of subsidisation in the industry. There are simply too many breeding ranches – although I see the number from 2009 to 2010 reduced from 1,377 to 1,350. The fact is, like owning a horse-racing stud farm, people sought to “gentrify” newly made money on the artificial property boom by buying ganaderias. What they didn’t realise is that they almost never make money, and a friend I can’t name told me the other day at dinner that the only one who made money that year were Núñez del Cuvillo. (Having trained on their cattle, I know why.)

If subsidies from town councils fail to pay for corridas in the ferias – which they already are – then you have the trickle down effect in reverse. What is more, it really is hard to justify taxing an anti-bullfighting country like the UK to subsidise the raising of fighting bulls in Spain, which is what happens in the EU and should probably be stopped (and I say that as a bullfighter.)

That is most helpful. Would you also have a number for your friend, the matador Cayetano Rivera Ordóñez? I might also quote your point about UK subsidization. Thanks ahead for your help.

To expand a little on what I said:

In 2008, I read an article in the best-selling paper in the English-speaking world (since the News of the World died), the Mail, titled: “How every family in Britain is paying to keep alive the barbarism that is bullfighting,” which said that the EU was funding bullfighting to the tune of £30 million a year out of the agricultural subsidies. Now, whilst I disagreed with almost everything else in the article, to the extent that I wrote an essay in Prospect magazine saying the British were either being hypocritical or xenophobic on this topic (which led me to visit Spain and train as a bullfighter and write my book) this does seem to me a genuine case of taxation without representation. What is more, it is a self-destructive policy: now it has been moved under the remit of the Ministry of Culture (and when the Right-wing Popular gets back into power, which it seems they must at the next election, and make the corrida de toros a matter of untouchable cultural heritage – following France) the only route for anti-taurinos to take to ban it will be the EU. And other countries can be made to take a more considered, liberal view on the matter, as long as they aren’t made to bankroll it. Notice the rabid tone of the article I mentioned, versus the four stars review my book got in that same paper, the Mail!

(Here is the anti-bullfighting article:

For Cayetano, I will put you in touch with Rubén Amon.

P.S. Some of these points were also addressed in my US National Public Radio interview under the title ‘Bullfighting In Spain Stays Alive Despite Regional Ban.’

(*I shouldn’t complain, the review of my book Into The Arena in that most animal-friendly of British newspapers, the Daily Mail was very good, and the one in the Mail on Sunday – the best-selling newspaper in the English-speaking world – was incredible, awarding me four stars out of five. It’s currently half price on Amazon UK and even less as an eBook – although it has yet to secure a US publisher…)