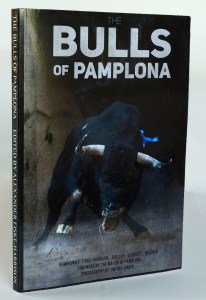 I have just released a book, which I edited and co-authored, titled The Bulls Of Pamplona (purchase details and the July 7th post-bull-run Pamplona signing by its authors – 1pm outside Marceliano’s – online here.) Among our list of esteemed authors – including a Hemingway, a Welles, and the finest writers and runners from around the world – there is a foreword “by the Mayor of Pamplona.”

It should be noted that the book has been some time in the making, and when I asked the Spanish Ambassador to the United Kingdom – I had given a speech for him on bullfighting to various notables including British Members of Parliament and Government Ministers, and he did this in return – for some words for the book, he in turn contacted the Ministry of Culture – who regulate the spectacle – who in turn contacted the President of Navarre, the autonomous community of which Pamplona is capital, who in turn contacted the Mayor’s office. The foreword I received back was during the term of office of Enrique Maya. However, given the official channels it came down, it is definitely a foreword by a serving Mayor of Pamplona, written as holder of office, not as private citizen or ex-Mayor.

However, the current Mayor, Joseba Asirón, holds rather different views about the emblematic and iconic Bulls of Pamplona, as anti-taurine organisations like PETA have noted.

At the bullfighting journalism awards 2018, given by the Spanish national newspaper ABC in Seville

I have recently been working with the charitable foundation that is the Fundación del Toro de Lidia, ‘Foundation of the Fighting Bull’, which seeks to preserve this spectacle and the unique breed of animals that are part of it, with all the cultural, economic and ecological benefits that come with it. In lieu of that I enclose below my translation of the open letter written by its spokesman Chapu Apaolaza to the current Mayor.

Larry, AFH and Chapu, immediately after the three ran the bulls together in Medina del Campo on September 2nd, 2017

Aside from being a well-known journalist – on a variety of subjects as well as bulls – Chapu is also an accomplished author of great sensibility and beauty in his prose. Which is why it is such a pleasure to be able to say that one of my own co-authors, Dr Larry Belcher – the only man of whom one can say he has been a bull-rider in Texas, a bull-runner in Pamplona and a professor of translation studies at the University of Valladolid – has translated Chapu’s book on his feelings about Pamplona, its Fiesta of San Fermín, and its bulls (which Chapu also runs): Three Prayers For The Countdown. Chapu will be signing copies – and myself and Larry and our co-author Joe Distler will be reading from it, among others – at the iconic Pamplona Café Iruña at midday on July 9th.

Here is Chapu’s letter in my own, rather inferior, English…

OPEN LETTER TO THE MAYOR OF PAMPLONA

We have been surprised, we the people of Pamplona, the celebrants of San Fermín, the lovers of the bulls and half the world in general, with some of your statements in which you affirm that although you cannot see a Fiesta of San Fermín without bulls, “but without corridas – ‘bullfights’ – yes.”

Mr Mayor, allow me to make a point. There already exists a San Fermín without bullfights, precisely the San Fermín of all those who decide not to go to the bullring, for whatever reason, in an exercise of free will, and who do not participate in the part of the program of festivities that has to do with bulls. The people of Pamplona and its visitors can choose the option of participating in any of these events, including bull-related ones, on equal terms and without having to feel less than anyone else.

There is no need to explain that the bull in the bullring and the encierros – ‘bull-runs’ – are in the historical DNA of the fiestas of the capital of Navarre, at the least since the fourteenth century. The toro bravo, ‘brave bull’, both in the bull-run and in the bullfight has been a fundamental linchpin for the celebrants of San Fermín, within the Fiesta itself and in the dimension of it that faces towards the world outside. For us, the bull represents both a totem and a fundamental figure from July 6th to 14th, of which we are proud and in which lies a great part of this phenomenal celebration of life that are the Fiestas of Navarre. We also understand that the bull-run is because there is a bullfight. [The one leads – historically, metaphorically and literally – to the other – AFH]

All in all, the Fiesta of San Fermín is many things. We attend a great cultural tradition that each person lives in their own particular way. For some, the essence is the bull-runs, for others the Procession and the religious events, the Procession of the Giants, the family meals, the rural sports, the bulls in the ring, the fairground or reunions with friends.

There is not one ‘single’ San Fermín, we do not want there to be only one single San Fermín, we do not understand it that way, but we warn that within this diverse and universally welcoming Pamplona, the bullfights are important to many. The reason is that bullfighting in Pamplona is very much ours, perhaps it is one of the most defining cultural elements of who we are. Because our bullfights not only share almost everything with the universal cultural legacy that is ‘bullfighting’ in the wider world, but our bullfights are also special, and different from those held in Lima in Peru, in Nîmes in France, in Seville in the south, in Aguascalientes in Mexico, in Azpeitia in the Basque Country, in Lisbon over the border, in Madrid, in Mexico City, in Bogota in Columbia or in our sister city Bayonne in France.

Pamplona has ‘the bull of Pamplona’, ‘the bullfighters of Pamplona’, and the famous sunny side of the bull-ring of Pamplona, the sound of Pamplona and especially the exemplary generosity and charity, embodied by – as is often pointed out by outsiders as example – the Casa de Misericordia, ‘House of Mercy’. [For over three centuries the bullfights in Pamplona have been arranged by, and held for the benefit of, this charitable institution for the poor, sick and elderly – AFH]

Bullfights make up our identity – among other things – and they are a fundamental part of the expression of own culture.

You, the esteemed mayor of all the people of Pamplona, wonder if a city is possible in which the identity of a part of it disappears? San Fermín without bullfights, without that which sustains a section – more, less, it does not matter – of its citizenry and its visitors? A debate that wonders – at the behest of terrorist violence and the threat of animal liberation movements – whether cultural censorship should be exercised upon this culture, exercised on a section of the people that you also represent and protect, and which would be an attempt to steal  one of its fundamental expressions?

It is not a matter of whether there can be many San Fermíns, but if we are going to allow there to be only one. It is not necessary for you to talk about the need for a plural fiesta in a plural city. The tolerance that on many occasions has been legitimately claimed for other sensitivities is what we now demand for the bullfights and the bull-runs from July 6 to 14 in the name not only of what we feel, but also that of freedom and diversity. There is not only one Fiesta; we do not allow this. In recent years, Pamplona has fought to become the capital of coexistence and respect, and has become a symbol and a place where men and especially women can feel comfortable and respected. We are convinced that this respect must be maintained towards all the types of tradition and culture of the inhabitants of the city and the members of the universal brotherhood of San Fermín.

Maybe there is the temptation to rebut me by saying that “bullfighting is not culture.” But that is something that neither you nor I can decide. Only the city, the one that crowds the Monumental bullring of Pamplona every afternoon, can decide if the bulls are an expression of their popular culture or not. This is something that UNESCO reminds us in all its international treaties on cultural diversity, subscribed to precisely so as to avoid ‘the few’ being tempted to decide what is culture and what is not. Aside from bullfighting, can you imagine a Fiesta in which a part of the population believed that they had the right to prohibit the entertainment of others?

[Pablo de Sarasate was a famous late 19th century violinist and composer from Pamplona. Barricada is a Navarrese hard rock band from Pamplona. A jota is a genre of music and dance of which the indigenous Navarrese variant is strikingly beautiful. Dantzaris are a group folk dance from Pamplona – AFH]

Of course it would be possible. But it would not be Pamplona anymore.

‘Spokesman of the Foundation of the Fighting Bull’