Out now is the eBook, Fiesta: How To Survive The Bulls Of Pamplona (available on Amazon in all regions – details on website here. ) I edited and contributed to it, as has John Hemingway – Ernest’s grandson, Beatrice Welles – Orson’s daughter, Joe Distler – the greatest ever American bull-runner, Jim Hollander – senior EPA photographer and Pamplona veteran of over 50 years, and four of the greatest Basque and Spanish runners, with over 2,000 bull-runs between them, Julen Madina, Miguel Ángel Eguiluz, Jokin Zuasti and Josechu Lopez (and photos by my old friend Nicolás Haro.)

Of course, you’ll notice the slight Anglo-Spanish imbalance above, so, luckily, Don Enrique Maya, the Mayor of Pamplona since 2011, has just sent me an official ‘Foreword’ to place in the book, making this Fiesta, not just the only guide book of its type, but simply the only guidebook in the English language. I enclose my translation of his Foreword below, for those who have already purchased the eBook (your devices should automatically update with it in the next 24 hours.)

As you can see, the publicity machine has already begun to turn, beginning with the Londoner’s Diary of the Evening Standard below, and SanFermin.com in Pamplona here. Now to finish my articles for The New York Times, Newsweek, hopefully The Toronto Star and, I believe, The Times.

Someone hide the red flags. The actor, writer and “bullfighter-philosopher” Alexander Fiske-Harrison has teamed up with John Hemingway — grandson of the novelist and blood-sports enthusiast Ernest — to put together a collection of essays and accounts of the infamous Spanish bull-running festival.

Fiesta: How to Survive the Bulls of Pamplona also includes a brief memoir by the daughter of another famous bullfighting enthusiast — the film director Orson Welles.

“We’re dividing the profits between the five major contributors,” Fiske-Harrison tells The Londoner, “but as photographer Jim Hollander pointed out, he gets the best deal — he’s the only one not running with the bulls in two weeks so may well be the only one around to collect! Although since I’m the editor, he’s going to have to get the money out of my bank account.” 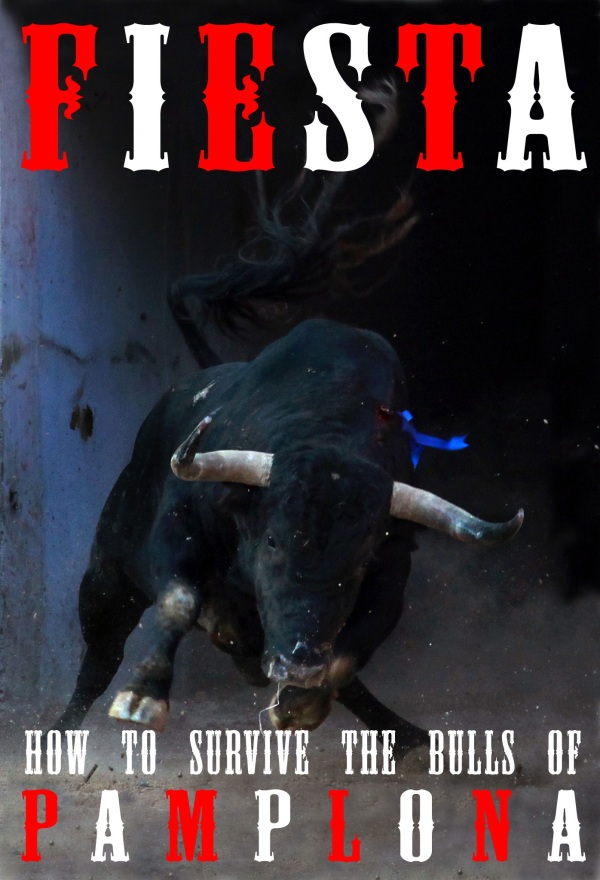 Foreword by the Mayor of Pamplona

The Encierro – the ‘bull-run’ – is rooted deep in the history of Pamplona, where the bulls have, since medieval times, been driven for the evening bullfight from outside the city’s walls to its centre. Over the centuries, the Encierro has grown until it has become a legendary race, combining the weight of a tradition amassed over decades and the universal reach of an international event in the 21st century.

1776 gave us the introduction of fencing on the route of the Encierro; in 1856 the bulls ran for the first time on calle Estafeta; in 1922 the layout we have today was finally settled; in 1974 the start of the race was changed to 8 o’clock in the morning; in 1982 they began live television broadcasts, and this year the Encierro Ordinance has been approved, which regulates the conditions under which the run occurs and establishes appropriate mechanisms to punish (in ways which are minor, serious and very serious) behaviors that are not allowed.

During this time, the Encierro has been built on the work of thousands of people and with the scrupulous respect for a thing as attractive as it is dangerous. Because, as is well recognised in the title of this book, “How to Survive the bulls of Pamplona,” the story of the Encierro is also a hard story, alternating joys and victorious moments with black days in our old festival calendar. In fact, since the San Fermín festival last year, one of the fence posts located in the plaza Consistorial serves as a tribute to the 15 people who have lost their lives on the run, with a caption that reads “To the fallen of the Encierro.”

With all its sharp edges, its beauty, its danger and its difficulties, the Encierro is now a spectacular space, with close to 3,500 runners risking their lives every morning, backed up by first-class support along the entire route and with more than 440 journalists accredited to send their updates to countries in all continents.

However, beyond the importance of the Encierro, the appeal of the fiestas of San Fermín are not just in the legendary run. We have eight and a half days full of joy and fun, and with a festive array composed of more than 400 events, most notably the Chupinazo, Procession and dances of the Giants and Big Heads, that underpin the excellent environment that lives on the streets of Pamplona and serves to renew year after year, the greatness of an long-awaited and heartfelt holiday.

As Mayor of Pamplona it is a great joy to participate in a book like this, especially one aimed at the English-speaking community, because of its commitment to approaching the San Fermín liturgy with respect for the traditions of Pamplona as its roadmap, and valuable testimonies from people who have, over decades, learned how participate in the Encierro with aplomb.

In this sense, I want to take the opportunity afforded to me in this foreword to congratulate Alexander Fiske-Harrison for this story, and all those who took part in this project. I am sure that this work will become a great reference for all lovers of the Encierro beyond our borders, and serve as a source of information for people who want to find out the details that have defined, for centuries, the most famous bull-run in the world.

And finally, a tip. If you have the opportunity to visit, do not hesitate. Pamplona awaits you with open arms and with only two conditions: the desire to have a good time and respect for the city and its traditions.

With thanks to Doña Yolanda Barcina, President of the Government of Navarre.

And to His Excellency, Federico Trillo-Figueroa Martínez-Conde, Ambassador from the Kingdom of Spain to the United Kingdom of Great Britain and Northern Ireland and El Señor Fidel López Álvarez, Minister-Counsellor for Cultural Affairs.