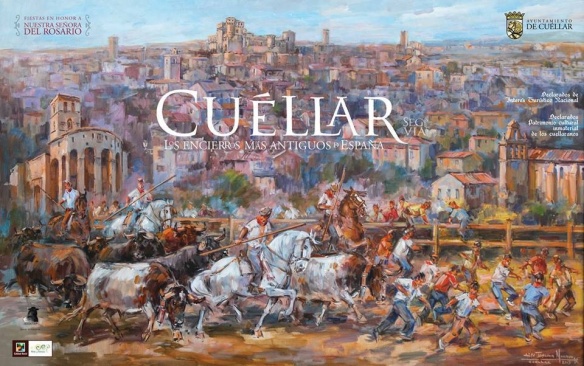 A fortnight ago I accepted, a prize from the most ancient encierros, ‘bull-runs’, in all of Spain, those of the town of Cuéllar in Old Castille.

Earlier that same day I nearly died while running with those bulls. The bull in the photo-detail below was suelto – ‘loose’, alone – and had come to halt facing away from me. So I seized what I thought was a chance and tried to pass it in the narrow street.

At the exact same moment another runner tried the same thing, coming from the opposite direction. When we collided, both of us with eyes only for the bull, he was bounced clear to safety while I lost my footing on the slippery street at the very instant the bull caught sight of our movement in its peripheral vision and charged across the street. It ground to a halt on its hooves as I struggled to get upright, my back against the fence that protects the spectators on the pavement.

In this moment – which lasted as infinitely long as all the novelists, journalists and diarists of near-death say it does – I stood so still as to render myself invisible to the bull whose horn points were paused either side of my chest.