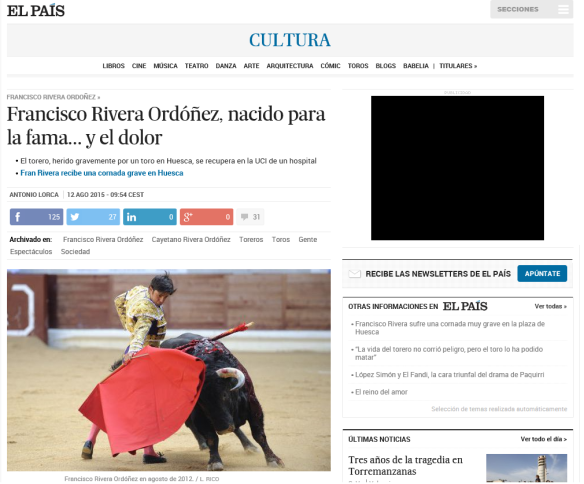 Francisco Rivera Ordóñez, born to fame… and to pain

This is the headline of the article by Antonio Lorca, bullfighting critic, in the culture section of El País, Spain’s left of centre national newspaper. Francisco is, along with his brother the matador Cayetano, heir to the greatest dynasty in the history of bullfighting.

Their father was Francisco Rivera Peréz, ‘Paquirri’, killed by a bull in 1984, a death made all the more famous since it was televised, as were his final moments on the surgeon’s table, telling the panicking medical staff that it didn’t matter, to remain calm. The effect of this death on his youngest son, my friend the matador Cayetano, I quoted in my previous post. I am sure his older brother Francisco felt similarly.

How Cayetano feels today I dare not ask: Francisco, who had also taken his father’s nom de guerre Paquirri, was gored by a bull in Huesca in Aragon in north-eastern Spain, a horn entering his abdominal cavity to a depth of 25cm – or a foot – hitting everything from his spine to his aorta in its visceral trajectory. As an admirer who has always found him charm itself in person, I wish him a swift and complete recovery.

In fact, let me rephrase that, as a human being of good conscience, I wish him a swift and complete recovery. Even were I to think the method of killing cattle used in the bullrings of Spain morally inferior to that in our British or American slaughterhouses I would not wish my fellow man anything else.

Yes, the bullfight – as we wrongly translated the word corrida – is a twenty-minute long staged ‘combat’ from the bull’s perspective (it is a dance from the man’s hence it is reviewed as such in the culture section) and some people might think this is worse than queuing for hours with the stench of death in the abattoir, even despite the average fighting bull dying at 5-years-old after living wild in forests while the average meat cow is reared in a corral or pen and died at 18 months, but that arguable ethical stance wouldn’t make me wish death on the practitioners of the art and craft of toreo. I eat cattle on the whim of their flavour, not from any need. This tells me everything about their actual moral status. N.B. All of the carcases end up in the food chain. 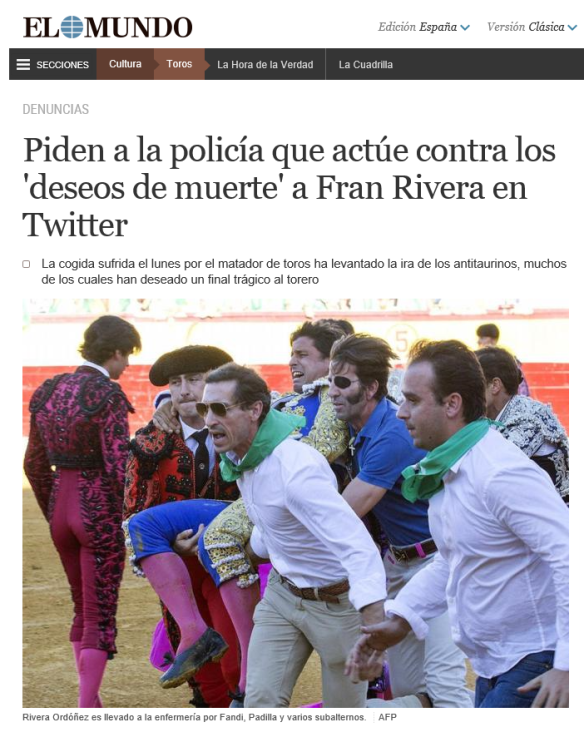 El Mundo, Spain’s equivalent of The Times. (My interview with Francisco’s brother Cayetano for the Sunday Times magazine is here. The man with an eyepatch carrying him is my friend the matador Juan José Padilla. My account of his comeback after losing his eye to a bull is in GQ magazine here.

However, in some cases an apparent – and loudly asserted – love of animals is actually a device to justify and conceal a deep hatred of humanity, especially of any variations or differences in it, anything that disagrees with your world view: the mask of overt and virtuous love soon slips to reveal skull of snarling, spitting hate beneath. Such as we see in the headline above. Much the same, I suspect, was true in the case of the unfortunate old lion, who people insist on calling Cecil as though he would have come if called, who was illegally shot in Zimbabwe. (I wrote about it in some detail on my personal blog here.) END_OF_DOCUMENT_TOKEN_TO_BE_REPLACED 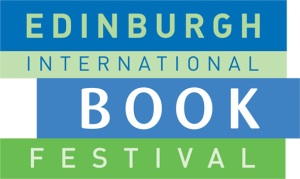 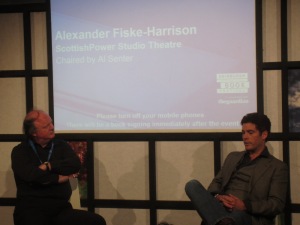 Yesterday evening I immensely enjoyed giving a talk to the sold out audience at the 500-seat Scottish Power Theatre at the Edinburgh International Book Festival on my award-winning book Into The Arena: The World Of The Spanish Bulllfight. It was followed by a discussion with the chair, Al Senter, and the Q&A session with the audience that (along with brief personal chats with about half of those present who came to have their books signed by me in the London Review of Books tent afterwards.) The questions were all well-informed and interesting, not least because, as many of the audience members said to me in person, I’d answered most of the more controversial questions in my opening talk. Here is the transcript of what I said:

I was going to read from my book, but it seems that the most important topic in the United Kingdom in the 21st Century, indeed in the English-speaking world – when discussing bullfighting – are the ethical issues surrounding the injuring and killing of animals as part of a public spectacle. So I want to address these head on.

As a liberal – in the classical, John Suart Mill sense – it is not my intention, or my place, to tell people whether or not they should approve of or enjoy bullfighting anymore than it is whether they should approve of or enjoy opera. However, when people seek to ban an art form from existing, so that other people may not enjoy it, whatever claims have been made by other people who have never witnessed it, then certain questions have to be raised.

Whatever the motivations behind the ban on bullfighting on Catalonia – and there have been accusations of underhand dealings, thumbing of noses at Madrid to gain votes, which has some circumstantial evidence for it as the popular Catalan regional hobby of attaching burning tar balls and fireworks onto bulls’ horns and letting them into the streets is unaffected by the legislation – anyway, the stated reason is the ethics, or rather lack of ethics, of bullfighting. So, that is what I should like to discuss here.

However, before I can do that, I have to dispel some myths that have long surrounded the bullfight, pieces of propaganda that have been propagated by the anti-bullfight lobby such as CAS International, the League Against Cruel Sports and PETA.

The one I most often hear is the complaint that the matador faces a broken down and destroyed animal. Take a close look at this bull in these photos and tell me how broken down it looks. 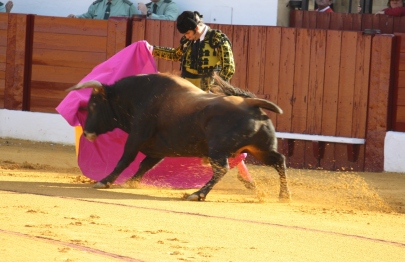