Given the large number of people who have wandered to this blog in search of answers about the so-called ‘conversion’ photograph of Álvaro Munera from bullfighter to animal rights activist – which is actually not of him at all – I thought that I would set another record straight that has been bothering me for a while.

When the philosopher of animal rights, Mark Rowlands, was mistakenly commissioned by The Times Literary Supplement to review my book Into The Arena: The World Of The Spanish Bullfight, one of the multitude of mistakes he made, both logical and empirical, was his statement that there have been only fifty-two bullfighters killed or fatally injured in the ring since 1700.

(Ironically, he also said that my friend and former teacher, the matador Juan José Padilla, was more likely to die on the way to the bullring than within it. This was published eight days before Padilla had the side of his face destroyed, skull multiply fractured, and eye removed from behind, as the other recent posts on this blog show.)

Juan José Padilla teaches me the ‘banderillas’ at his home in ’09 (Photo: Nicolás Haro)

However, since I had never been macabre enough to try to add up the exact number of bullfighters killed in the ring, I did not have a statistic to hand to counter his general claim. I did, however, know the origin of Rowlands’ statement.

The American author on bullfighting Barnaby Conrad wrote in The People’s Almanac, No.2, Issue 2 (1978):

While hundreds of bullfighters have died in the arena, of the approximately 325 major matadors since 1700, only 52 have been killed in the arena.

I picked Rowlands up on his misleading misquotation in our exchange on the letters’ page of the TLS here (along with a few of his many other errors.) In his reply, he seemed not to have even understood that he was misquoting someone else’s statistic:

I say fifty-two in the last 300 years, Fiske-Harrison says (vaguely) “hundreds”… Fiske-Harrison’s language gives a false impression of the dangers to bullfighters.

Personally, I suspect that his intial error was actually to go on Google and take the first result he could find – Wikipedia – and, when challenged, he realised that this is absolutely no excuse for a tenured professor writing in a respected literary magazine which at one time took its reviews from the likes of T. S. Eliot, Virginia Woolf and Henry James.

Whilst I still do not know exactly how many bullfighters have died in the past three hundred years, I do now know what the minimum number is: it is 533.

That, by the way, is just the professionals notable enough to report on. The figure does not include amateurs killed in plazas and on ranches. And we can safely assume – looking that the documentary history of Spain and Latin America in the past three hundred years – that there were plenty of professionals whose deaths went unreported, especially in pre–antibiotic era when death would have come later from gangrene, tentanus and the other terrible routes which Hemingway described with such grim accuracy in Death In The Afternoon However, I think that speculating on figures without evidence is an excuse for bad scholarship.

In terms of evidence, every one of these 533 is described in detail in a four volume Spanish work entitled “Victims of Bullfighting.” All four volumes are available online here, and the numbers easily verifiable via the contents’ pages even for non-Spanish speakers.

Yesterday evening I immensely enjoyed giving a talk to the sold out audience at the 500-seat Scottish Power Theatre at the Edinburgh International Book Festival on my award-winning book Into The Arena: The World Of The Spanish Bulllfight. It was followed by a discussion with the chair, Al Senter, and the Q&A session with the audience that (along with brief personal chats with about half of those present who came to have their books signed by me in the London Review of Books tent afterwards.) The questions were all well-informed and interesting, not least because, as many of the audience members said to me in person, I’d answered most of the more controversial questions in my opening talk. Here is the transcript of what I said:

I was going to read from my book, but it seems that the most important topic in the United Kingdom in the 21st Century, indeed in the English-speaking world – when discussing bullfighting – are the ethical issues surrounding the injuring and killing of animals as part of a public spectacle. So I want to address these head on.

As a liberal – in the classical, John Suart Mill sense – it is not my intention, or my place, to tell people whether or not they should approve of or enjoy bullfighting anymore than it is whether they should approve of or enjoy opera. However, when people seek to ban an art form from existing, so that other people may not enjoy it, whatever claims have been made by other people who have never witnessed it, then certain questions have to be raised.

Whatever the motivations behind the ban on bullfighting on Catalonia – and there have been accusations of underhand dealings, thumbing of noses at Madrid to gain votes, which has some circumstantial evidence for it as the popular Catalan regional hobby of attaching burning tar balls and fireworks onto bulls’ horns and letting them into the streets is unaffected by the legislation – anyway, the stated reason is the ethics, or rather lack of ethics, of bullfighting. So, that is what I should like to discuss here.

However, before I can do that, I have to dispel some myths that have long surrounded the bullfight, pieces of propaganda that have been propagated by the anti-bullfight lobby such as CAS International, the League Against Cruel Sports and PETA.

The one I most often hear is the complaint that the matador faces a broken down and destroyed animal. Take a close look at this bull in these photos and tell me how broken down it looks.

END_OF_DOCUMENT_TOKEN_TO_BE_REPLACED

It’s the latest literary spat. Mark Rowlands, a British philosophy professor who spent a decade living with a wolf, gave a savage review to Alexander Fiske-Harrison’s book Into The Arena on the art of the matador in the Times Literary Supplement in September. Now Fiske-Harrison is as wounded as a bull lanced by a picador — and the men are locked in a battle of letters and blog posts against each other. Fiske-Harrison’s complaint is that Rowlands, who concerns himself with animal welfare, would be naturally indisposed to his love of bull-fighting, not to mention that Fiske-Harrison has previously given him a bad review. “Mark Rowlands is a proponent of vegetarianism and once tried to make his pet wolf into one, as described in The Philosopher and the Wolf,” says Fiske-Harrison. Professor Rowlands, who teaches at the University of Miami, had described Fiske-Harrison’s writing as being infected with “vainglory” and “startling arrogance” in his love of bull-fighting.The red rag in this feud was first waved two years when Fiske-Harrison reviewed Mark Rowlands’s wolf book for Prospect magazine. “If you combine misanthropy and lycophilia,” he wrote, “the resulting hybrid, lycanthropy, is indeed interesting but philosophically quite sterile.” Over to Rowlands. “I felt rather guilty that I was dispensing such a negative review,” he tells me. “I did, of course, inform the TLS of the fact that he had previously reviewed a book of mine. I resent the suggestion that my negative review was the result of personal animus … [it] was the result of the book not being very good.” Rowlands has also called Fiske-Harrison “thin-skinned”. The blog argument now runs to several thousands words, with still no victor in sight.

P.S. I suspect that Rowlands’ loathing of the book is more about my having fought a bull – see photo from my book above – than my ‘love’ of watching it. My aficion, or ‘love’, is actually what is in question throughout the book, something every other reviewer noted. As for the idea that a review could wound me – well, that’s just nice journalism I guess. My actual issues with Rowlands are quite clearly pointed out in our exchange in the letters’ page of the TLS here. 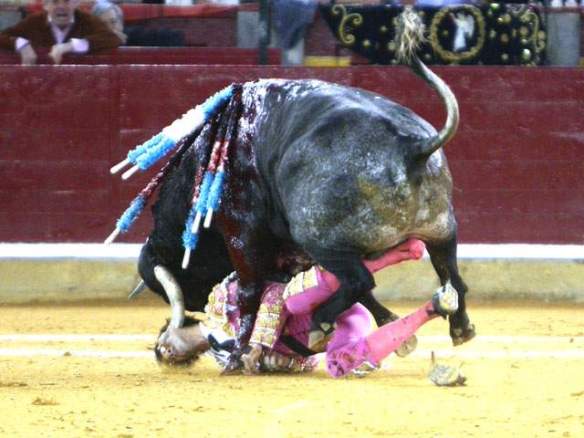 I hear, courtesy of our mutual brother-in-arms Adolfo Suárez Illana (son of the founder of democratic Spain and its first president, Adolfo Suárez), that the matador Juan José Padilla is recovering following a long operation to try to repair the terrible damage wreaked on his face by a bull in Zaragoza on Friday evening. As the photo shows, the bull Marqués no. 8, from the breeder Ana Romero, pounced on Padilla as he tripped and fell during the act of the banderillas – Padilla being one of the few matadors in the modern era who places his own banderillas, rather than delegating it to his banderilleros. The bull, which weighed 508kg and was 5 years and 8 months old (only four months short of the upper age limit) entered its horn under the left hand side of his jaw and drove it up and out through his left eye socket. As the bull was drawn off him by the other toreros’ capes Padilla got to his feet saying “I can’t see, I can’t see” before collapsing into the arms of his assistants and being carried from the ring to the infirmary and from there to hospital. The bull’s horn severed the main facial nerve of the left side of Padilla’s face, which is now paralysed, and the optic nerve of the eye which seems unlikely to recover its sight. The bull was then killed by Miguel Abellán, who wept as he did so, having only recently recovered from a similarly bad goring himself. 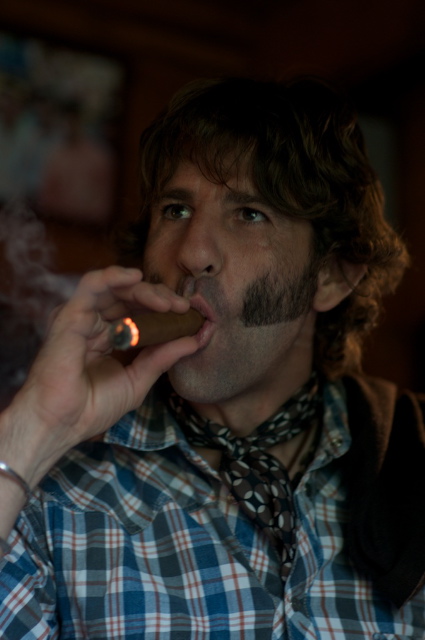 Whilst researching my book, I came to know Padilla very well and he features in a half dozen chapters in my book, Into The Arena. He is a force of nature who dwarfs everything around him, as I am sure he will this terrible injury. The best description of him I have heard is that of my mother who met him with me at a bullfight in Cazalla de la Sierra in ’09. She said he was like Scaramouche, who in the novel’s opening line is described as “born with the gift of laughter and a sense that the world was mad, and that was his entire patrimony.” The photo below is from the tail end of one of our wild nights out, taken by my friend Nicolás Haro (as is the one above), with Padilla’s childhood friend, the great flamenco dancer Antonio ‘El Pipa’ in the foreground at his house. You can read the extract of that chapter of the book at The Pamplona Post here. 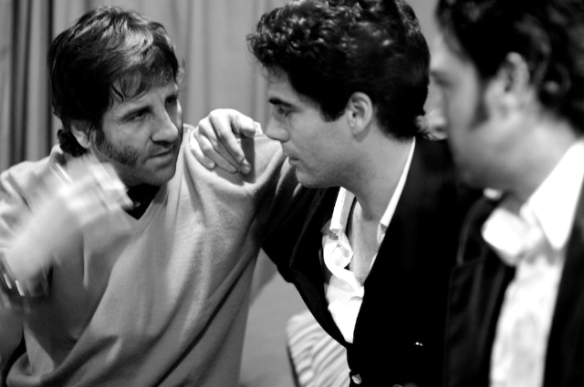 P.S. All of this has quite rightly taken precedence in my mind over my dispute with the philosopher Mark Rowlands in The Times Literary Supplement, which can be found here, and which I will follow up further soon. Needless to say, any man who can write, “Padilla is more likely to die trying to get to the arena than in it,” clearly hasn’t got the faintest idea what he is talking about, nor has the dignity to keep his ignorance to himself.